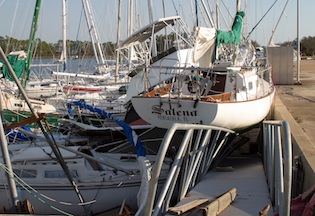 What is a Hurricane?

A hurricane is a type of tropical cyclone, the generic term for a low pressure system that generally forms in the tropics. A typical cyclone is accompanied by thunderstorms, and in the Northern Hemisphere, a counterclockwise circulation of winds near the earth’s surface.

All Atlantic and Gulf of Mexico coastal areas are subject to hurricanes or tropical storms. Parts of the Southwest United States and the Pacific Coast experience heavy rains and floods each year from hurricanes spawned off Mexico. The Atlantic hurricane season lasts from June to November, with the peak season from mid-August to late October.

Hurricanes can cause catastrophic damage to coastlines and several hundred miles inland. Winds can exceed 155 miles per hour. Hurricanes and tropical storms can also spawn tornadoes and microbursts, create storm surges along the coast, and cause extensive damage from heavy rainfall.

Hurricanes are classified into five categories based on their wind speed, central pressure, and damage potential (see chart). Category Three and higher hurricanes are considered major hurricanes, though Categories One and Two are still extremely dangerous and warrant your full attention.

*This email is not a substitute for requesting police services. Contact dispatch at the number listed above. All calls for services or police response need to be routed through dispatch.