The World Languages Program at UWF offers a minor in Spanish as well as courses in Japanese, Spanish, Latin and French. Students gain a foundation in communicating in a foreign language, understanding and working within cultural diversity, and looking at the world from a different perspective.

Welcome to the World Languages Program at the University of West Florida!

In order to understand our own cultural heritage and the thought patterns that inform it is to compare them to cultures and languages that are different from our own. By stepping into another cultural space—through language, literature, film and popular culture—we learn to appreciate who we are. We also learn to look at the world from a different perspective and more fully comprehend the range and complexities of human life.

The World Languages Program at UWF is committed to providing students with the opportunity to embark on this exciting journey. From basic classes for beginners of a language to advanced courses in literature, culture, film and civilization, UWF language students engage in meaningful activities as well as in career-enhancing strategies - including learning to communicate in a foreign language, understanding and working within cultural diversity, applying historical background knowledge, negotiating meaning and problem-solving.

In small classes and a student-centered environment, our faculty is committed to enhance students’ linguistic and cultural literacy.

We offer a minor in Spanish as well as courses in Japanese, Spanish, Latin, and French.

Here are a few reasons.

More than 21 million students study Spanish as a foreign language in
the world. United States, Brazil and France occupy the top positions
in absolute numbers of students of Spanish.

Spanish is the mother tongue of approximately 470 million people in the world.

Spanish is the second most used language in the two main social
networks in the world: Facebook and Twitter, after English; and the
third one in the Internet, based on the number of users.

In the USA, enrollment in Spanish courses exceeds the total number of
students enrolled in courses of other languages. 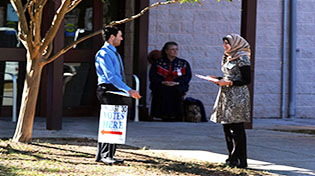 Students receive tools to successfully communicate in a global environment.