From UWF, Melissa Strozza, 2011 graduate, made a home run in her field.

In 2019, Melissa Strozza, 2011 UWF graduate, was a part of baseball history. She played a key position for the Washington Nationals, fielding the team’s communication efforts all the way to the World Series.

Strozza  said that when the Nationals contacted her about an open position on their communication team,  she jumped at the opportunity for career growth. She currently serves as the National’s communication manager. Strozza thanks UWF for the role her education played in getting her to where she is today.

At UWF, Strozza majored in communications, with a focus in public relations, and minored in Spanish, which she says she used in every position since graduation. Following graduation, Strozza served in  various internships in New York City. In 2012, her experience landed her an opportunity to work in Major League Baseball. She has worked with the MLB since, and was most recently with the New York Mets, prior to joining the Washington Nationals.

As communication manager, Strozza liaises between the team and all partnering media outlets and says she sees herself as “working customer service” for the outlets. She also oversees the National’s media credentialing to ensure the continuation of  proper media coverage.

There is never a dull moment for Strozza. From February to March, she  joins the team for Spring Training in Florida. During baseball season, she works every home game and travels with the team to about half of the road games. Each day, she prepares the manager for pre and post-game press conferences. She assists the National’s media clubhouse with coordinating player interviews, as well as prepares players for television, radio and print interviews.

Things have looked a little different in 2020, due to COVID-19. However, Strozza says the team still receives many requests, which involve publicity pitches and working with media outlets to create content that will help keep fans engaged and entertained. According to Strozza, The Nationals organization, including the facility and players, have also been very involved in community initiatives that include raising awareness and funds.

Strozza says that being a part of a  historic team was very special. Last year, the Washington Nationals made MLB history, winning its first-ever World Series.

Strozza says that being a part of a  historic team was very special. Last year, the Washington Nationals made MLB history, winning its first-ever World Series.

So what was working the World Series like for Strozza? In her words, “It was a whirlwind with little sleep but so worth it.”  Increased media requests demanded content provision for “the entire world to see.”

Of the final moments of the win, Strozza recounted, “I will never forget that moment in the dugout when we recorded the last out to win the whole thing, watching our team celebrate and then a few seconds later stepping onto the field in awe to join them.” 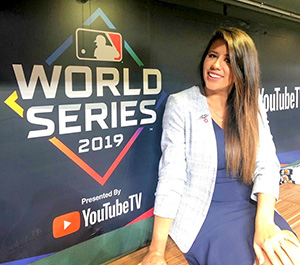 (Photo, above: Strozza is the communication manager for the Washington Nationals.)

Strozza was right by the team’s side to help tell their winning story. Not only was the team’s winning memorable, but Strozza says  the win reflected the first seven-game series in Major League Baseball, the National Hockey League and the National Basketball Association history in which the home team lost every game.

“Any time you saw one of our baseball players doing an interview on TV before or after a game, that was our communications team shuffling them from one interview to the next. We had to manage a good balance so that we wouldn’t wear our players out, since they had games.” For Strozza and the communication team, the challenge was to help conserve the players’ energy, while positioning them to  receive recognition for their hard work and draw positive coverage to the Nationals.

Of the final moments of the win, Strozza recounted, “I will never forget that moment in the dugout when we recorded the last out to win the whole thing, watching our team celebrate and then a few seconds later stepping onto the field in awe to join them.” 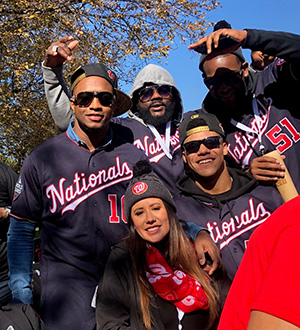 (Photo, above: Strozza celebrates with members of the team.)

As a Pensacola native who left the area briefly, Strozza said she realized that UWF and Pensacola is where she wanted to earn a bachelor’s degree.

She says, “I truly would not be where I am today without my teachers and my experiences at UWF.

She says, “I truly would not be where I am today without my teachers and my experiences at UWF. Mrs. Eileen Perrigo lit a fire in me from the first second of my very first public relations class.” She credits UWF, her classroom and project experience, and a UWF alum, with preparing her for where she is today.

Strozza says, “Baseball is a grind and I love every second of it. My goal is to have a family and find a balance so that I can continue to do what I love.”

Strozza says she also wants to continue creating a path for women and minorities just like the women who came before her and carved a path in baseball for her to dream and succeed.

Remember the College of Arts, Social Sciences and Humanities in your annual giving!