UWF has about 30 feral cats that populate the university campus. 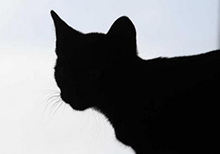 Information on becoming a volunteer or asking questions regarding campus feral cats is soon to come. Stay tuned!

The UWF Campus Cat Program (CCP) was established 2017 to oversee the campus feral cat populations living on UWF campus. Our volunteers consist of task force members, faculty, staff, students and alumni as well as community members who monitor, evaluate and provide humane care for the campus cats. “A feral cat is a cat who is born and raised in the wild, or one who has been abandoned or become lost and reverted back to a 'wild', instinctual state in order to survive," according to Alley Cat Rescues Guide to Managing Community (2015). Those on campus often are the offspring of abandoned pets. This is different from a friendly stray that is just lost. Like most feral, the campus cats have limited human contacts. Some hide, some watch people from a distance. A few will allow touch and petting. UWF joins other universities across the country in using the veterinarian-approved TNR system (Trap-Neuter-Return) for managing our cat populations. UWF has about 30 feral cats that populate the university campus.

How does a managed feral cat colony work?

How can you help?

If you have information about a cat on campus which needs attention, please contact the UWF Police at 850-474-2415. We work closely with campus police, and they can contact us quickly.

A: Feral cats in urban areas are usually the offspring of domestic cats that have grown up with limited human contact. They revert to their wild instinctive ways. Ferals are different from strays, which are domesticated cats, often someone’s pet, that have lost their way but still respond easily to humans.

There’s a window in which human contact is necessary (up to about 12 weeks) for a cat to have some ability to trust and respond to people. After this time, they may regard humans from a distance, but you can’t touch them or domesticate them. Campus cats fall on a wide continuum from those quickly hide at the sight of a human to those who will let you pet them and even rub up against you. Alley Cat Rescue prefers to call urban ferals community cats.

A: Feral cats are common in areas with transient populations, such as apartment complexes and universities. Feral cats are the generational offspring of local unsterilized family pets abandoned and left to reproduce. The ecosystem of a university environment supports their proliferation: lots of food trash = rodents = cats.

A: The local rescue organizations deal with adoptable, socialized animals. Feral cats are not house cats; they usually grow up wild or semi-wild. They do not tolerate being in enclosed environments, and many do not tolerate the proximity of humans. These cats are not candidates for rescue adoption programs.

A: Some of the campus cats have lived around students so long, they do become “socialized ferals.” The ones we evaluate as being adoptable, we try to place into homes. But we make that judgment very carefully, as the operative word is always “feral.” Some may be friendly in the campus courtyard, but ultimately not appropriate for house dwelling. That said, we are striving to place adoptable kittens into forever homes.

A: Extermination has been attempted by other campuses and at apartment complexes. It never proves to be a cost-effective, long-term solution. Not only is it inhumane, but extermination creates the “vacuum effect.” Once you remove the managed and sterilized animals, unsterilized animals will move in to fill the gap ‒ after all, the first ones found it to be an attractive location ‒ and the process will start all over again. A TNR program in a feral cat colony halts that process. It is also important to note that it is illegal to harm a cat ‒ any outside cat. Rodent control is a plus with a feral population.

A: Yes, the vast majority of the cats have names and their own unique personalities. But it’s not that we think of them as pets ‒ they’re certainly not. The volunteers need to be able to distinguish one cat from another in conversation and documentation, and a name is easier than saying, “The tabby with the white tip on its tail.” We use names like blue, Ms. Kitty, Scout and Papa. Each cat is associated with a colony location on campus. UWF has 4 established cat colonies on campus.

A: We are currently working on identifying all the feral cats and cat colonies on campus. We have estimated the feral cat population on campus to be around 30.

A: UWF has a team of volunteers who feed, water, monitor and provide shelter and veterinary care for the campus cats throughout the year.