The UWF Speech and Debate team not only participates in various state, regional, and national events, but also hosts competitions on campus.

The UWF Forensics Program allows undergraduates the opportunity to develop their communication skills through participation in regional and national tournaments. Students travel several weekends each semester to intercollegiate speech and debate tournaments where they have the opportunity to compete against peers from across the nation and receive feedback from members of the academic community all while acting as ambassadors for UWF.

Students may also choose to participate in campus speech and debate activities throughout the school year, ranging from public performances to competitive campus events.

The team meets weekly during the fall and spring semesters. Students also meet with coaches for individual sessions at their convenience. 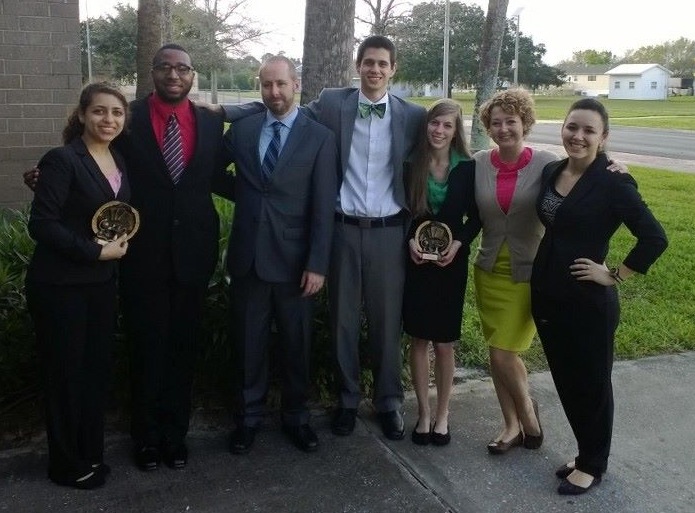 The 2013-2014 University of West Florida Speech and Debate Team.

The University of West Florida has been a premier spot for tournaments. The Speech and Debate team hosts the annual Marks Invitational Tournament where colleges from all over the country join the team for a weekend of warm weather and stimulating competition. The team also repeatedly hosted the Florida Intercollegiate Forensics Association State Championship as well as the Interstate Oratory Competition and the Novice National Championship Tournament.

Adam Blood, instructor of communication, teaches public speaking and is the director of the UWF Speech and Debate program. Blood previously coached speech and debate teams at the University of Nebraska at Lincoln and University of Central Missouri.

Nicole Allen is a graduate student in the Strategic Communication and Leadership program and graduated Summa Cum Laude with a degree in Communication from UWF in 2020. Nicole has over 20 years experience as a competitor and coach in Competitive Forensics, and is an intern for Navy Federal Credit Union where she coaches executive leaders in storytelling and public address. As the current graduate assistant for the UWF Speech and Debate Team, Nicole primarily coaches individual events such as Poetry Interpretation, Program Oral Interpretation, Prose Interpretation, and Duo Interpretation. Nicole also assists in coaching debate, limited prep events, and platform speeches as well as judging competitive events and assisting with tournament management with Director of Forensics, Dr. Adam Blood. Coaching and mentoring students is Nicole's passion, and she is grateful to take part in helping UWF students find their voice through this amazing activity.

Give Now
Department of Communication