The Saint Michael's Cemetery interactive maps allows users to take a virtual tour of the cemetery and view all the grave, marker, botanical, soil, and topographical GIS layers created for the SMC project. 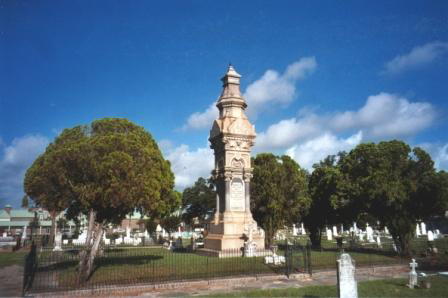 When using the interactive map you must zoom in to a grave or marker before turning on the photographs, this will also label the graves with the last name. To visually tour only the photographs visit the photograph repository. For a non-spatial database with links to all photographs and all marker information download this file.

The Search for the Hidden People of St. Michael's Cemetery Project

Nowhere else in our society are we as cognizant of the cultural landscape of our communities as in our historic cemeteries. Understanding a cemetery’s relationship to the physical and cultural landscape of the early community it served, and in many cases, the modern community it continues to serve enhances our understanding of how our communities were organized and grew. Cemeteries are the repositories of last statements and speak to both the individual and collective cultural makeup of a community through time. St. Michael's Cemetery, once situated on the outskirts of a colonial town, is today an eight-acre green space in the heart of urban, historic Pensacola, Florida. Like most historic cemeteries, St. Michael’s reflects the social history of the community it is associated with. The contemporary landscape of the cemetery contains approximately 3200 marked graves documenting the rich diversity of Pensacola’s community from the early 19th century onward. However, the contemporary landscape reflects only one dimension of the site. Historical research indicates the area immediately around (if not partially or completely within) St. Michael’s was used by the colonial community as a burial ground beginning in the mid to late 1700s. Unmarked burials encountered during modern interment episodes and restoration projects, as well as information contained in existing burial records and historical accounts, indicate a large number of unmarked burials are present. Remote sensing studies also support the existence of an extensive unmarked population spanning approximately 230 years. While the origins of St. Michael's are unclear, the cemetery certainly predates the oldest extant marker present on the site, which dates to 1812. The Search for the Hidden People of St. Michael’s Cemetery Project explores the relationship between cemetery and community via multidisciplinary investigations. Changes to the physical and cultural landscape, documentation of unmarked burials, and identification of many of the previously unknown individuals who lost their lives on the Florida Gulf Coast frontier help to better understand and interpret historic St. Michael’s Cemetery and its relationship to the community it serves. Sponsored in part by the State of Florida, Department of State, Division of Historical Resources, assisted by the Florida Historical Commission.

Below is a photograph of the largest marker in St. Michael's Cemetery. The Daniel Sullivan monument is located near the northeast entrance to the cemetery. The 3D animation below reflects the underground radar images around the Sullivan marker as you move from the cemetery surface deeper underground. Within the 3D model at a depth of approximately 1-meter, an unmarked burial to the south of the Major Sullivan burial appears below the surface. The unmarked burial appears as a yellow and red feature.

Below are links to two recent aerial photographs of St. Michael's Cemetery.

St. Michael's Cemetery is an eight-acre green space in the heart of urban, historic Pensacola, Florida. Probably in use during the late 18th century, the land was officially designated a cemetery by the King of Spain in 1807. Although assigned to the Catholic inhabitants of Pensacola, people of all faiths have traditionally been buried here. The cemetery is an open-air museum that is a testament to the diverse history of Pensacola.

Pensacola drew immigrants from around the world, people who came to West Florida to make their fortunes or seek adventure. The cemetery is the resting place of Captains of Industry, victims of Yellow Fever epidemics and steamship explosions, along with those who died in childbirth, as infants, and of old age.

Tombstones in the cemetery reflect not only the status and ethnicity of individuals but also reflect society as a whole on the Florida Gulf Coast frontier. There is a strong sense of place and identity in the cemetery; a feeling of community.

As is often the case in older cemeteries, St. Michael's has declined over the past 200 years. Vandalism, neglect, hurricanes, and natural aging have all contributed to the physical decline of the cemetery. Recognizing not only the historical importance of the site but its potential as an open-air museum in the urban environment, residents of Pensacola are supporting a major restoration project at the cemetery.

Geographers from the University of West Florida have surveyed the cemetery using a total station (a precision survey instrument) and survey-grade GPS. A GIS of the cemetery has been constructed consisting of all graves, tombs, roads, botanical data, and other features within the cemetery. This GIS is available as an interactive map at the above link. Simply click on any grave on the map for more information. You can also query the database behind the map to search for information about people buried in the cemetery. During 2007 GPR (Ground Penetrating Radar) data will be added to the interactive maps that will help reveal information about the location of the "Hidden Peoples of St. Michael's Cemetery."

List of known deaths from 1761 to 1781 for all of Pensacola and associated metadata.