At the GeoData Center and across campus, our research scientists routinely create maps, software applications and code, and other geospatial tools. 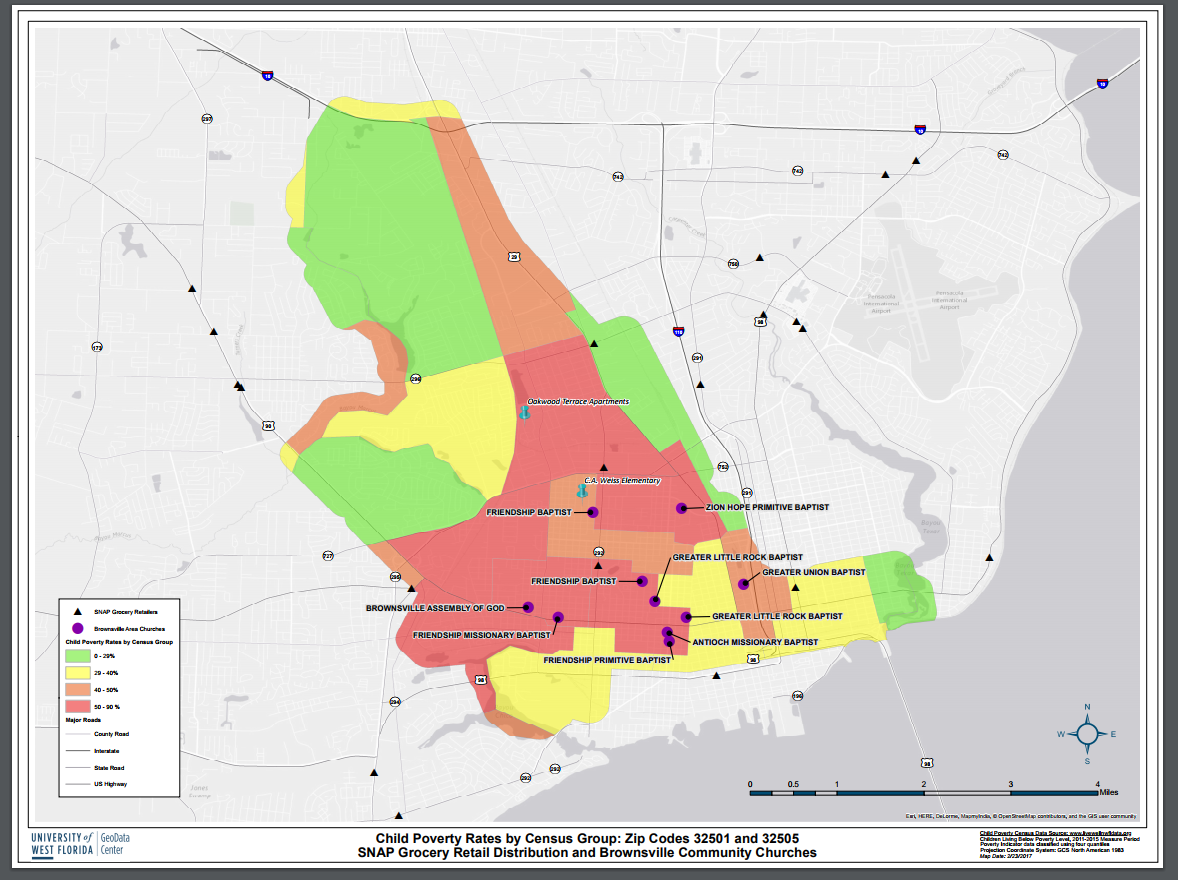 Local Child Poverty Rates and Food Desert Mapping. The GDC has been working closely with Live Well Partnership to assist in their efforts of assessing and improving the health of the Northwest Florida community. Mapping and GIS analysis are utilized by the Livewell group to help raise awareness in the community, plan outreach programs, and seek funding. The sample shown here represents child poverty rates per census group in the key focus area of zip codes 32501 and 32502 in Escambia County, FL. Grocery centers and large church congregations were mapped along with this data as part of an ongoing effort to make healthy food readily accessible to families living in food deserts. 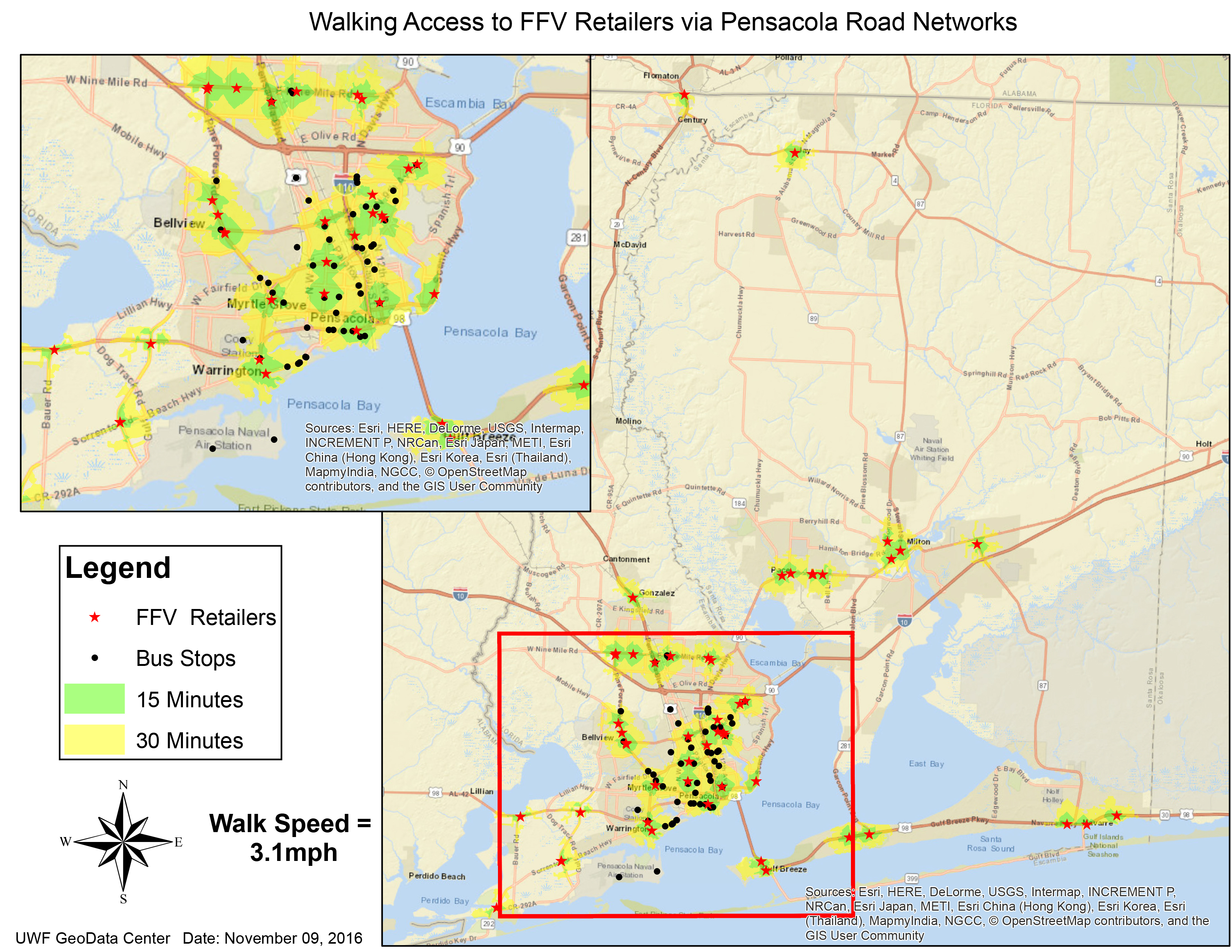 Performing network analysis: Using road networks to calculate possible transit distances from a certain point allows users to see the coverage area for any given feature. Range can be a function of distance or time. In this case, we used road networks to investigate equity of healthy food access (grocery stores) by those communities who need it most and may not have a car to travel far distances. 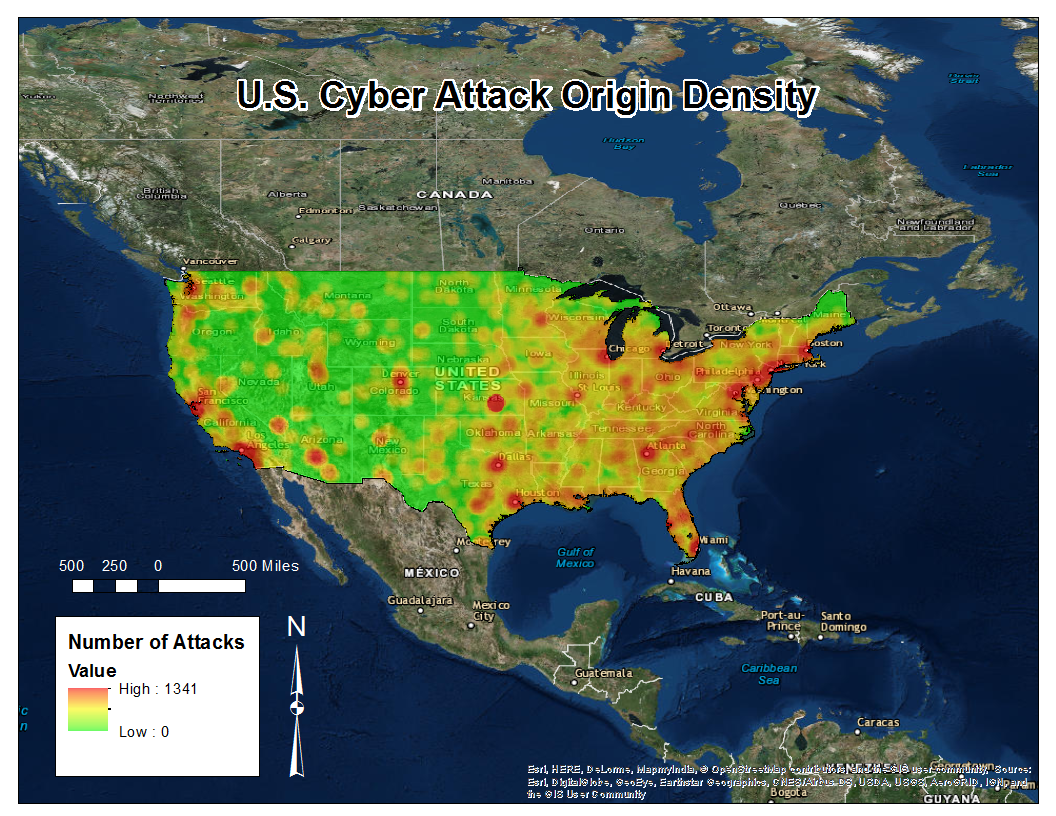 Collecting the IP addresses of over a million cyber attacks that occurred over a three month span allowed us to Geo-locate and map the sources of those cyber attacks, and look for patterns there-in. One location was found to be the origin of over 30,000 attacks. 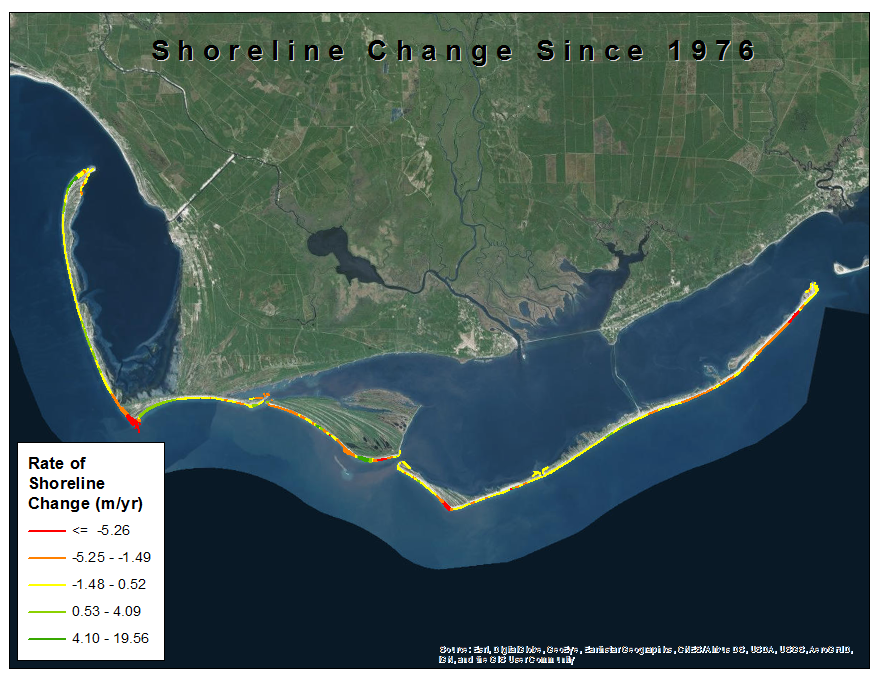 Using satellite imagery from 1972 until present, we are able to detect areas along the coast that have suffered the most severe erosion. By delineating the shorelines of each year and using those as the input to the USGS Digital Shoreline Analysis System (DSAS), you can quantifiably and visually highlight areas that have suffered the greatest amount of erosion or deposition. 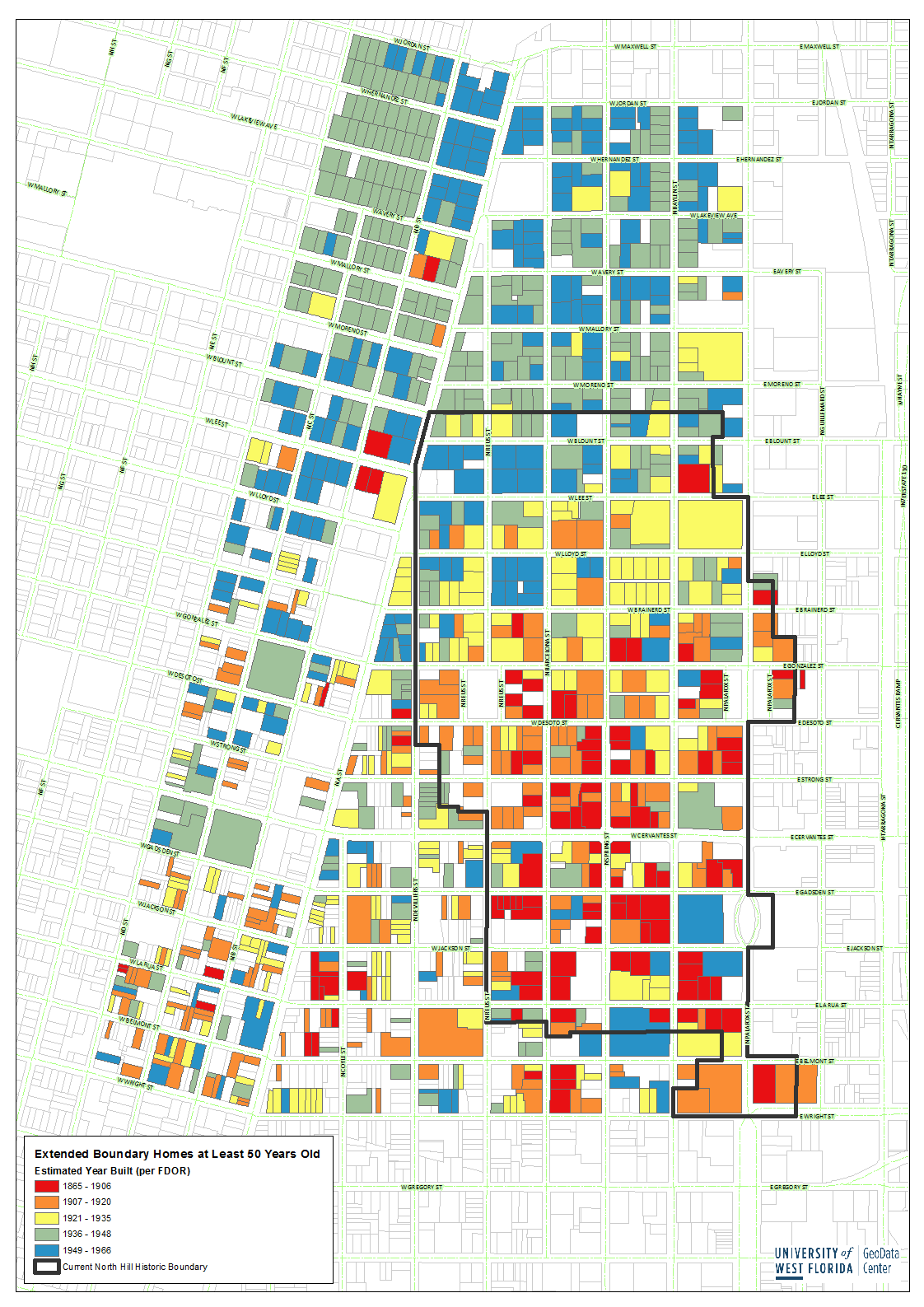 The North Hill Preservation Association is dedicated to preserving and maintaining the unique and beautiful historic homes, parks, and cemeteries in the North Hill neighborhood near downtown Pensacola, FL. The Geo Data Center at UWF contributes boundary maps and spatial analysis for the current and potentially expanding historic community. The sample shown here uses Florida Department of Revenue property tax data to identify and categorize homes that are at least 50 years old for planning purposes in this historic preservation district. 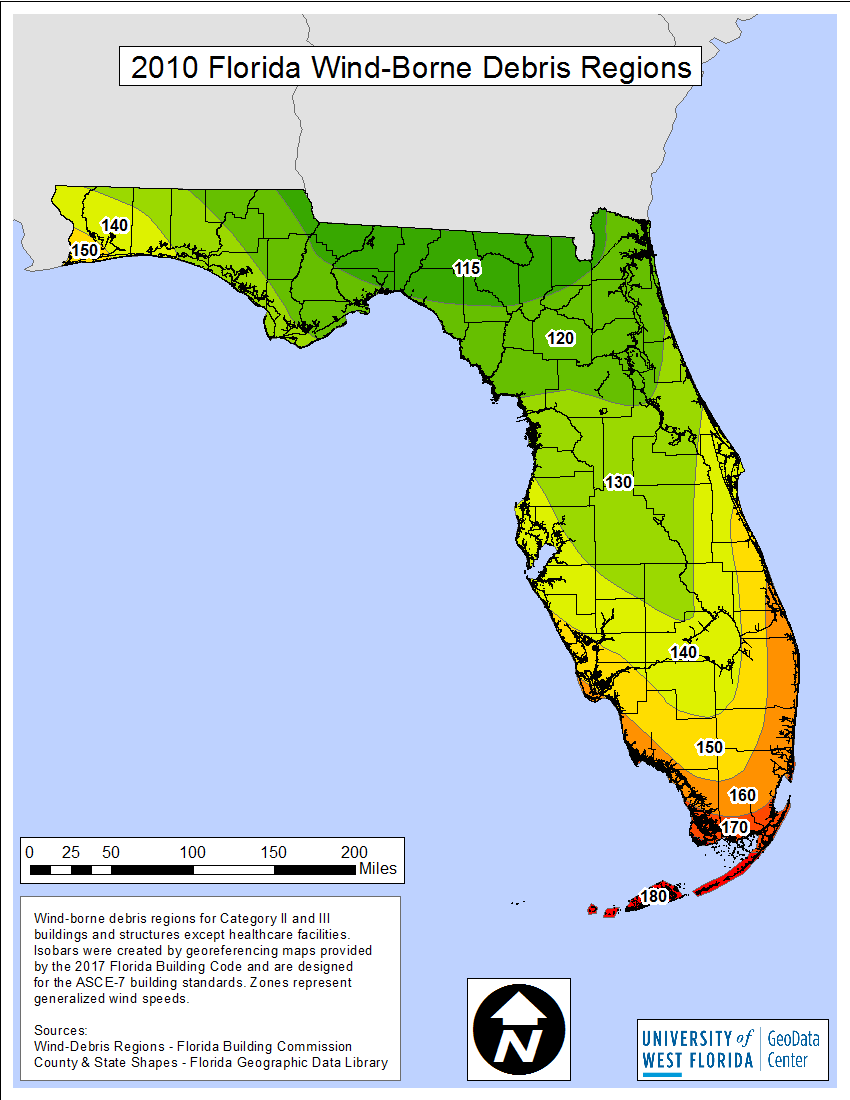 A map representing the 2010 Florida Wind-Borne Debris Regions also commonly known as “wind zones”. Isobars were created by geo-referencing maps provided by the 2017 Florida Building Code and are designed for the ASCE-7 building standards. Zones represent the minimal wind speeds that structures within must be able to withstand. The state level wind zones are somewhat generalized and it is up to the county level governments to create their own detailed zones that at least meet these minimum standards.