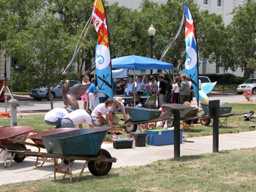 UWF Public archaeology returned to downtown Pensacola in the summers of 2005 and 2006. Excavations were conducted at the Commanding Officer’s Compound inside the former colonial fort that was located downtown between 1756 and 1821. Today, this area is within the UWF Historic Pensacola Village behind the Pensacola Museum of History and has been set aside as an “archaeological” park. 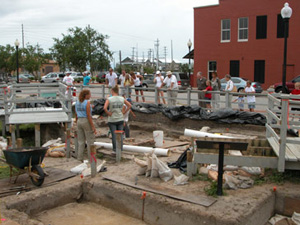 UWF excavations at this site in 1993 revealed tantalizing clues about what remains underground. The 1993 finds included a British period outdoor kitchen area with brick hearths surrounded by refuse deposits relating to food preparation and consumption. Soils stains underlying the British deposits suggested that earlier Spanish pits and structures might be present, but there was no time to continue excavations into these deposits. When research ended in 1993, the exceptional outdoor kitchen complex was developed into one of the main exhibits of the Colonial Archaeological Trail in Old Pensacola. 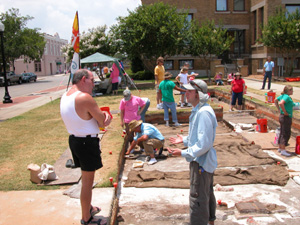 The research aspect of the project continued research in one of the most productive and interesting places in colonial Pensacola: the heart of the fortified area in the Commanding Officer’s Compound. The former excavation unit was re-opened and expanded during the summers of 2005 and 2006. More specifically the research goals of this project were to: locate and identify buildings related to the officers quarters and compound, investigate the multiple wells across the site, and locate the west wall of Presidio San Miguel/Fort of Pensacola.

This was a true public archaeology project:

The most spectacular finds of the 2005 and 2006 fieldwork were First Spanish period (1754-1763), British Period (1763-1781) and Second Spanish Period (1781-1821) features: three barrel wells, a cool storage pit, the fort wall and moat. The well and cool storage features extended below the water table. Well points had to be installed into the units to lower the water for excavation. The pits for the well and storage feature intersected revealing the sequence of construction. The complete lower portion of the lowest well was lined with an intact barrel and contained a crushed pail that had been dropped to the bottom. The intact base of the rectangular “cooler” was made of logs nailed together. A wine bottle was found in the “cooler.” The feature had been dismantled and filled with earth and refuse. An understanding of construction methods were obtained during the excavation of the fort wall and moat. One of the wells excavated in 2006 had two uses, first as a well and later dismantled and reused as a cistern.

Wall trenches for Early Spanish buildings crisscrossing the area deep below the British and Late Spanish deposits were also located. Remains of these early buildings are very rare finds. In addition, lots of amazing artifacts were discovered including a horse bridle bit, stemmed glassware, salt glazed stoneware dishes, and personal items such as beads and cuff links.