Located in Northwest Florida, UWF is minutes from the Alabama border and some of the world’s best beaches. Convenient to both I-10 and I-65, the University's main campus in Pensacola is only three hours from Tallahassee, less than four hours to New Orleans and approximately five hours to Atlanta. 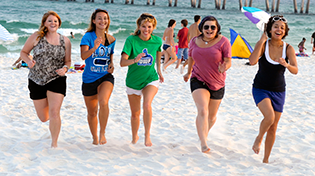 Pensacola's waters provide a wealth of opportunities for activities including swimming, surfing, kayaking, canoeing, fishing and diving. The white sands and warm waters along the Gulf of Mexico attract thousands of locals and vacationing visitors to the beach throughout the year.