When the doors to the University of West Florida opened in the fall of 1967, it didn’t just mark the beginning of classes. It marked the beginning of a story—the UWF story. This timeline details the University’s history over the past five decades, characterized by vision, hope and strategic growth. Where we’ve been is only the beginning—our foundation for the future. 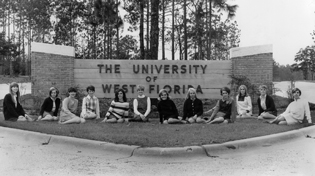 Establishment of the University of West Florida

May: Following a feasibility study that demonstrated the need for a university in Northwest Florida, the Florida Legislature allocates funding to develop UWF, which became the sixth out of twelve institutions of higher learning in the State University System of Florida.

July: Dr. Harold Crosby assumes office as the first UWF president. Crosby oversees construction of the campus and a litany of firsts for the University including the undergraduate programs receiving accreditation from the Southern Association of Colleges and Schools, the UWF Foundation being chartered, the opening of the John C. Pace Library and the establishment of the UWF Fort Walton Beach Center.

April: Groundbreaking for UWF takes place on April 16, 1965, on the 13 parcels of land that Escambia County purchased for $1.2 million.

May: President Crosby selects the chambered nautilus as the official emblem. This was selected alongside the poem, "The Chambered Nautilus" by Oliver Wendell Holmes.

June: President Crosby moves into Building 10, one of the first three completed buildings. 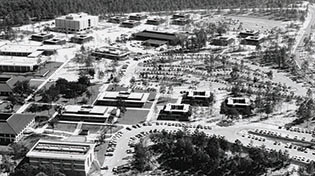 September: UWF opens as an upper division school, with students enrolling in Fall 1967.

November: The student body selects the Argonauts, the crew of the ship Argo who sought to capture the golden fleece under the leadership of Jason in Greek mythology, as the mascot. 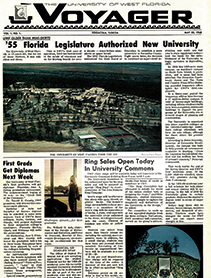 January: President Crosby dedicates the library to John C. Pace, a prominent supporter of higher education in Northwest Florida and first chairman of the State Board of Regents.

May: UWF students inaugurate the campus newspaper, The Voyager.

August: After being admitted in April, the UWF athletic department begins its membership in the National Association of Intercollegiate Athletics. 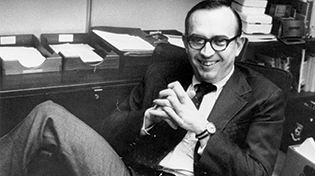 July: The University organizes into a traditional structure by establishing three colleges: the College of Arts and Sciences, the College of Business and the College of Education. UWF previously operated with three resident colleges, Alpha, Gamma and Omega, designed for upper-level and graduate students. 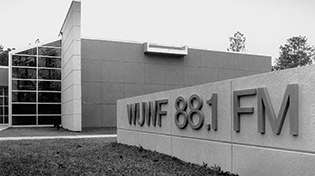 January: WUWF Public Radio makes its inaugural broadcast. The station was established with a mission to create a more informed public—one challenged and invigorated by a deeper understanding and appreciation of events, ideas, and cultures. Through innovative community partnerships, the station produces, acquires and distributes programming that meets the highest standards of public service in journalism and cultural expression. 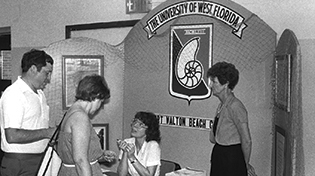 August: UWF establishes a lower division and freshmen enroll for the first time after authorization from the Florida Legislature. 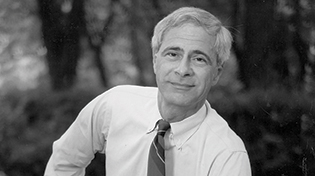 September: Dr. Morris Marx assumes the presidency and serves for 14 years before retiring in 2002. Marx oversees significant expansion, highlighted by the opening of the Fort Walton Beach location and ushering in education specialist program and facilities such as the Center for Fine and Performing Arts, College of Education Complex, student services building, psychology building, residence halls and on-campus apartments. 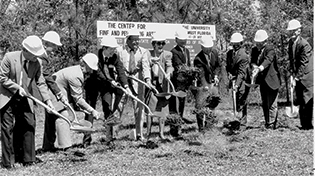 October: President Marx dedicates the newly opened Center for Fine & Performing Arts as the heart of artistic expression for UWF and a primary destination for arts and culture in Northwest Florida.

August: The University transitions from the NAIA to full membership in the National Collegiate Athletic Association Division II and the Gulf South Conference. 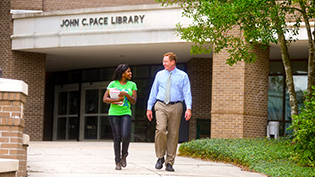 September: UWF unveils an expanded and renovated John C. Pace Library, featuring the addition of the eastside structure, which includes distinctive, curved first and second floors and a four-story stairwell. 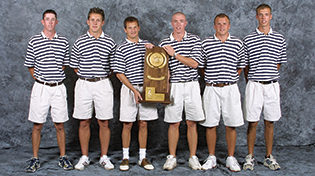 July: Following a repeal by the Florida Legislature, the Historic Pensacola Preservation Board transfers its building and collections to UWF. West Florida Historic Preservation, Inc. is established as a direct support organization of the University. In 2013, the organization’s name changes to UWF Historic Trust to emphasize that the sites, structures, collections, programs and exhibits of the organization represent a public trust. 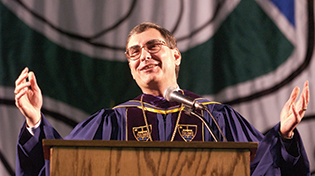 July: Dr. John Cavanaugh becomes president and serves for six years. Under his guidance, the Florida Legislature approves a four-year nursing program at UWF, the University establishes a degree in hospitality, recreation and resort management and graduate classes in historic preservation begin in Historic Pensacola Village. Also, UWF survives Hurricane Ivan in 2004 and Hurricane Dennis in 2005 and becomes a national model for disaster planning and preparedness.

March: The new Health, Leisure and Sports Facility opens, which includes offices, classrooms and labs for use by recreation and academic departments, as well as a 10,000-square-foot fitness center, racquetball courts, an indoor running track, multiple gyms and workout spaces and a 36-foot climbing wall. 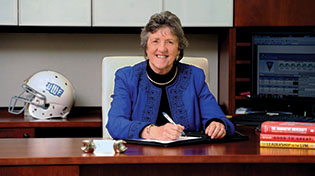 July: Dr. Judith Bense takes office as the fifth UWF president and serves for eight years before retiring in 2016. Bense focuses on growth and visibility while enhancing the student experience and creating partnerships to make UWF a first-choice university. She builds a network of community partners and identifies regional workforce needs, and UWF increases its enrollment and strengthens its academic programs during her tenure. 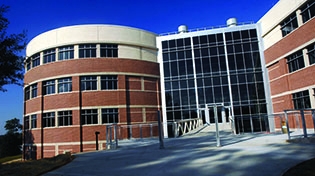 February: UWF opens a new science and engineering facility. The $30.6 million, state-funded building embodies the principles of Project Kaleidoscope, an advocate in the U.S. for building and sustaining strong undergraduate programs in science, technology, engineering and math fields.

August: Heritage Hall opens to offer housing that eases the transition from a traditional residence hall to living in an apartment. Programming in Heritage Hall is designed for students in their first year to senior year at UWF. 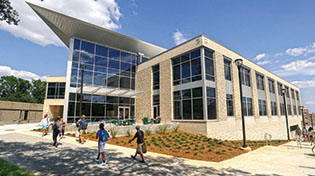 April: UWF Innovation Institute launches the Center for Cybersecurity, providing a hub for research on cybersecurity and opportunities for students to move into high-demand career fields through collaborative partnerships.

August: UWF announces the formation of the College of Health, dividing the former College of Science, Engineering and Health into two separate colleges in order to position the University as a major player in the development of innovative solutions to substantial health care challenges.

December: UWF identifies the archaeological site of the Luna settlement in a developed neighborhood in Pensacola. The first multi-year European settlement in the United States existed from 1559-1561. 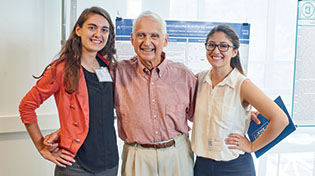 June: UWF takes ownership of the Pensacola Museum of Art. This agreement complements art education at UWF as the University assumes responsibility for nurturing an endowment and maintaining the museum’s art collection—including several hundred pieces of 20th- and 21st-century art on paper, as well as three-dimensional works.

September: UWF football kicks off its inaugural season under Head Coach Pete Shinnick. Argos beat Ave Maria 45-0 in their opener and proceed to sell out each of their five home games at Blue Wahoos Stadium.

November: UWF publicly launches its 50th Anniversary Capital Campaign with a fundraising goal of $50 million. This marks the largest capital campaign in University history. The quiet phase of the campaign started in January 2011 and the campaign lasts through the end of 2017. 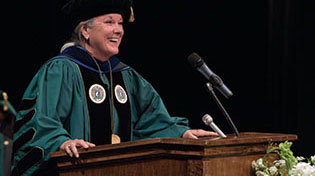 January: Dr. Martha Saunders assumes the presidency after previously serving in a variety of roles, including provost and executive vice president. President Saunders’ vision for UWF is for it to grow beyond its beginnings as a regional comprehensive university. She plans to build on the University’s strengths and its undergraduate traditions while creating programs that will attract the faculty and research funding needed to make the leap to the next level.

January: The University creates the Division of Research and Strategic Innovation to advance the state’s economy and strengthens its workforce by nurturing and applying innovative ideas in funded research, scholarship, business development, strategic partnerships and outreach.

June: UWF ranks in the top three public universities for the Florida Board of Governors performance-based funding model.

December: UWF's football team becomes an NCAA II 2017 National Finalist, in only the team's second year on the field.

January: Attorney and local community advocate Fred Levin gifted his multi-million dollar waterfront home and estate to the University. The donation included much of the renovated home’s contents, including works of art and collectibles, totaling more than $8 million to mark the largest gift by a living donor in the University's history. The property, previously known as Timeless Tanglewood, is now known as the UWF’s President’s Club at Timeless Tanglewood.

January: In recognition of attorney Fred Levin’s continuous support of the University and in honor of the outstanding service and commitment of former Florida Governor Reubin O’D. Askew, UWF officially named the Department of Government as the Reubin O’D. Askew Department of Government in January 2018. Askew served as the 37th governor of Florida for two terms from 1971-1979 and was Levin’s personal friend and law partner. This marks the first academic department formally named at the University.

January: UWF exceeds its campaign goal and raises $64.7 million by almost 20,000 donors, including 55 planned gifts and nearly $18 million in scholarships.

February: The Consumer Credit Counseling Service of West Florida donates $1.5 million to establish the Louis A. Maygarden, Jr. Center for Financial Literacy at the UWF College of Business. The center aims to improve the financial literacy of students and the citizens of Northwest Florida through counseling service and seminars.

December: UWF confers the 100,000th degree at its Fall 2018 Commencement on December 15, reaching a major milestone since the institution opened in 1967.

January: UWF becomes first University in North America to host parkrun, a series of free 5Ks offered on Saturday mornings throughout the year.

March: UWF announces it will offer a new communication degree program at UWF on the Emerald Coast beginning in Fall 2019.

June: UWF ranks in the top two public universities for the Florida Board of Governors performance-based funding model, securing a spot in the top three for three consecutive years.

April: In response to a shortage of full face shields for healthcare workers at the beginning of the COVID-19 pandemic, one of the University’s direct support organizations manufactured, managed and distributed 3D-printed full face shield supplies at its Sea3D Additive Manufacturing Laboratory in downtown Pensacola.

March: UWF announces it will offer a new communication degree program at UWF on the Emerald Coast beginning in Fall 2019.

September: The University of West Florida announced an anonymous gift to rename the Department of Music as the Dr. Grier Williams School of Music, in memory of the first chair of the music department.

August: UWF hosted the virtual commencement in response to the State University System of Florida directing all state universities to postpone in-person spring and summer commencement ceremonies due to COVID-19 health guidelines on gatherings.

UWF helps in fight against COVID-19

Historic Gift in Excess of $8.5 million

September: The late Dr. Herman and Valerie Rolfs made a historic gift in excess of $8.5 million which created the Dr. Grier Williams School of Music. Their gift will provide significant scholarships and resources for music students annually.

January: UWF announces a gift commitment of more than $600,000 from Sandy Sansing to support the Sandy Sansing Need-Based Student-Athlete Scholarship and expand the Darrell Gooden Center to include a new Sports Medicine Center.

UWF earns top spot in Board of Governors’ Metric 1

June: UWF is No. 1 in the Florida State University System for Metric 1 of the Florida Board of Governors’ 2021-22 performance-based funding model.

July: UWF announces it will offer a new Bachelor of Science in Business Administration degree in Human Resources Management starting in Fall 2022.

September: For the first time in program history, the UWF Football team will play the entire 2022 home season at the UWF Pensacola Campus at Pen Air Field.

September: The Aylstock, Witkin, Kreis & Overholtz law firm gifted $2.5 million to name the AWKO Center for Leadership at UWF and enhance its initiatives.

October: Drs. Muhammad and Fatema Rashid continued a legacy of giving to UWF through a $1 million gift to name the Dr. Muhammad Harunur Rashid Department of Electrical and Computer Engineering in the Hal Marcus College of Science and Engineering. The Rashids have six endowments established in the college -- the most established endowments to UWF by a donor.