Viewpoint - Building a Tradition: Game Day with the Band

As the sun sets on the stadium and the crowd shouts “Blue and Green,” band members lift their instruments to play the UWF Fight Song and welcome the Argos to the field for another night of college football! However, a band member’s game day starts long before the game’s kickoff.

The UWF Argo Athletic Band begins each game day three hours prior to kickoff, at the University of West Florida’s campus. A large moving truck sits outside of the UWF Center for Fine and Performing Arts and waits for a few dedicated band members to load the equipment. The loading crew arrives an hour before inspections start to make sure that the instruments and supplies are ready to be hauled to the Admiral Fetterman Field at Blue Wahoos Stadium in Downtown Pensacola.

At the stadium, crew members unload the truck and begin inspections. Dr. Josh Bledsoe, the band’s director, makes sure that all of the members are wearing the right attire, have their instrument prepared, and everything is game-day ready. Meanwhile, the head drum major and assistant drum major take attendance.

Regarding his role in game-day preparation, Daniel Allison-Williams, bass drummer, says, “I want people to see us warming up before the game and what it takes to prepare for game day.”

After getting the thumbs up from the head drum major and the directors, band members then make their way to the front of the stadium where a crowd waits in anticipation. Concert on the Corner is a new tradition this year and starts an hour before kickoff in front of the stadium. The band, cheerleaders, and fans gather to spark excitement for another game day. The concert offers a way for fans to hear some of their favorite tunes before making their way to the stadium.

Kameron Horak, alto saxophone player, says, “I love Concert at the Corner because it isn’t just for students, but everyone gets to enjoy it.”

The pre-game concert, although it is new, is a start to a long-lasting University tradition for all Argos.

At the conclusion of the concert, the drumline starts playing their cadence, as the band makes their way into the stadium. The members then walk through the stadium tunnel and arrive at the end zone. Walking through the stadium tunnel and entering the field can be an amazing experience for first year band members. Once at the end zone, everyone, except the drumline, make their way to their seats. The drumline finishes performing on the endzone in front of fans and the UWF football team. The team cheers loudly as the drumline gets them pumped up for a good game. The drumline then makes their way into the stands and sets up their equipment for an exciting night. Now, the hard work begins. 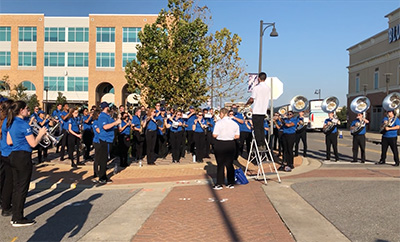 View "Building a Tradition: Game Day with the Band," by Alyssa Lee

Delaney Borrelli, head drum major, fixes her headset and listens closely for her que to start the UWF Fight Song, written by Dr. Joseph Spaniola,  UWF music professor and director of jazz studies and music theory. As the band plays the first notes, a swarm of Argos, dawned in blue and green, bust out onto the field. The crowd cheers loudly, but the music of the band trumps it all. The band energizes the fans and adds to the excitement.

As half time begins, the band runs onto the field and begins an eight-minute half time performance. The crowd cheers loudly as a sea of instruments stretch across the yard lines. The performance was a booming success.

The rest of game day continues as usual, and the members faces beam knowing they will be in UWFs history books as the first generation of band members to step foot onto the field.

After the game, the members pack up and clean their entire area. Outside the stadium, the loading crew reloads the truck to take all of the equipment back to campus. It has been a long day. But, there are no time for breaks. The members know that they must do it all over again soon.

According to alto saxophone player, Kameron Horak, “Band members typically spend 10-14 hours a week practicing with their instrument.” Mellophone player, Anna Collins said, “I clean my instrument every week and polish it every other week.”

These students do a lot of work behind the scenes to provide an amazing game-day experience for UWF fans.

In its third season, the UWF Argo Athletic Band is growing and building traditions from the ground up. However, they need your help to do so, whether that be through donations, volunteering, or cheering them on while they play. Make sure to follow them on social media @ArgoAthleticBand or online at uwf.edu/argoathleticband for more on involvement.

Alyssa Lee has been a graduate assistant for the Argo Athletic Band since January of this year. She is currently pursuing her Master of Arts in Strategic Communication and Leadership at the University of West Florida. Where she previously graduated with a Bachelor of Arts in Public Relations. She assists the band during events, designs promotional items, creates videos, and is the manager for the Argo Athletic Band Facebook and Instagram pages. Alyssa also spends her summers as a Pathways Intern for NASA’s Armstrong Flight Research Center, where she writes articles, assists in event planning, creates post for social media, and much more. She plans to graduate in August of 2020 and is proud to be a part of helping the band grow.

Remember the College of Arts, Social Sciences and Humanities in your annual giving!