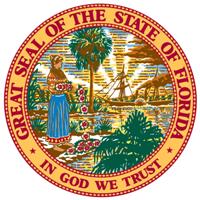 The Governor is responsible for day-to-day operations of the state and is the chief executive officer. Florida’s Constitution creates a weak governor construct, sharing executive responsibility in many areas with three independently elected Cabinet officers.  The governor appoints not only the heads of departments under sole oversight of the governor, but also the heads of departments that are under both the governor and Cabinet's oversight, with majority approval.  The governor also appoints members of several regulatory boards and commissions.

By executive order, the governor may suspend from office any state or county elected official who is not subject to impeachment. The Governor has the power to fill vacancies in office by appointment, according to law.  The governor cannot suspend the lieutenant governor, Cabinet members, Supreme Court justices, appellate judges, or circuit court judges.  They can be removed only by legislative impeachment.

The office of Lieutenant Governor was authorized in the 1968 revision of the Constitution, but duties of that office were left to the discretion of the governor and the legislature.  The only Constitutional chore of this office-holder is to become the governor should that office become vacant due to death, impeachment trial, or incapacity; although in recent years, the LG has been the designated liaison between the Legislature and the Governor’s office.  The Lieutenant Governor is chosen by the gubernatorial candidate as a running mate and is elected on the same ticket with the governor.

Florida's Executive Branch is composed of the governor and lieutenant governor and the Cabinet whose responsibilities include: